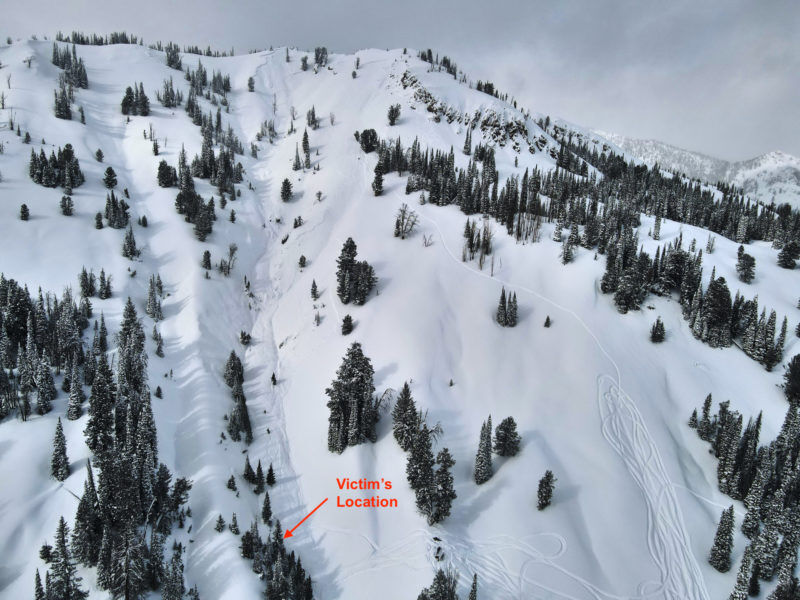 A snowmobiler was carried some 600 feet by a large avalanche in the Smiley Creek drainage on Friday, according to the Sawtooth Avalanche Center. The rider attempted to climb the slope--his tracks are visible in the photo above--before triggering the slide, the Center said.

This story was updated Saturday, Feb. 20 with additional information from the Sawtooth Avalanche Center and Tuesday, Feb. 23 with the name of the deceased.

A Montana man died in an avalanche near Smiley Creek Friday afternoon, according to the Sawtooth Avalanche Center and Blaine County Coroner Russ Mikel.

Andrew Jessop of Pinesdale, Mont., was 30 years old, Mikel told the Express on Tuesday. By that time, his family had been notified of the accident, Mikel said.

Jessop was snowmobiling in the Smiley Creek drainage about 8 miles from Galena Summit when he triggered "a very large avalanche" while trying to climb the slope, according to the Avalanche Center's preliminary report. He was caught and carried some 600 feet. Jessop deployed his airbag and managed to stay atop the debris, but apparently died of injuries sustained during the slide. Other members of his party couldn't revive him at the accident site.

The avalanche ultimately traveled 1,000 vertical feet, stretching 500 feet across a gully "that acted as a terrain trap," the report stated. The contours funneled the slide inward, piling debris 20-30 feet deep by the time it finally stopped.

"We extend our heartfelt condolences to the victim’s friends and family," the Center said.

The snowpack failed on a thin layer of weak facets more than three weeks old, the Center determined. The Jan. 27 layer was then loaded with new and wind-blown snow, according to the initial report.  The Avalanche Center expects to release a full accident report in the coming days.

The SAC's weekend forecast deemed avalanche danger "considerable" in the Sawtooth zone and "moderate" in the remainder of its forecast area, including the Wood River Valley and Smoky Mountains.

This is a developing story. Sawtooth Avalanche Center staff were on the scene late Friday afternoon, and expected to have more information when they returned to town Friday evening. For more information as it becomes available, check back with www.mtexpress.com.