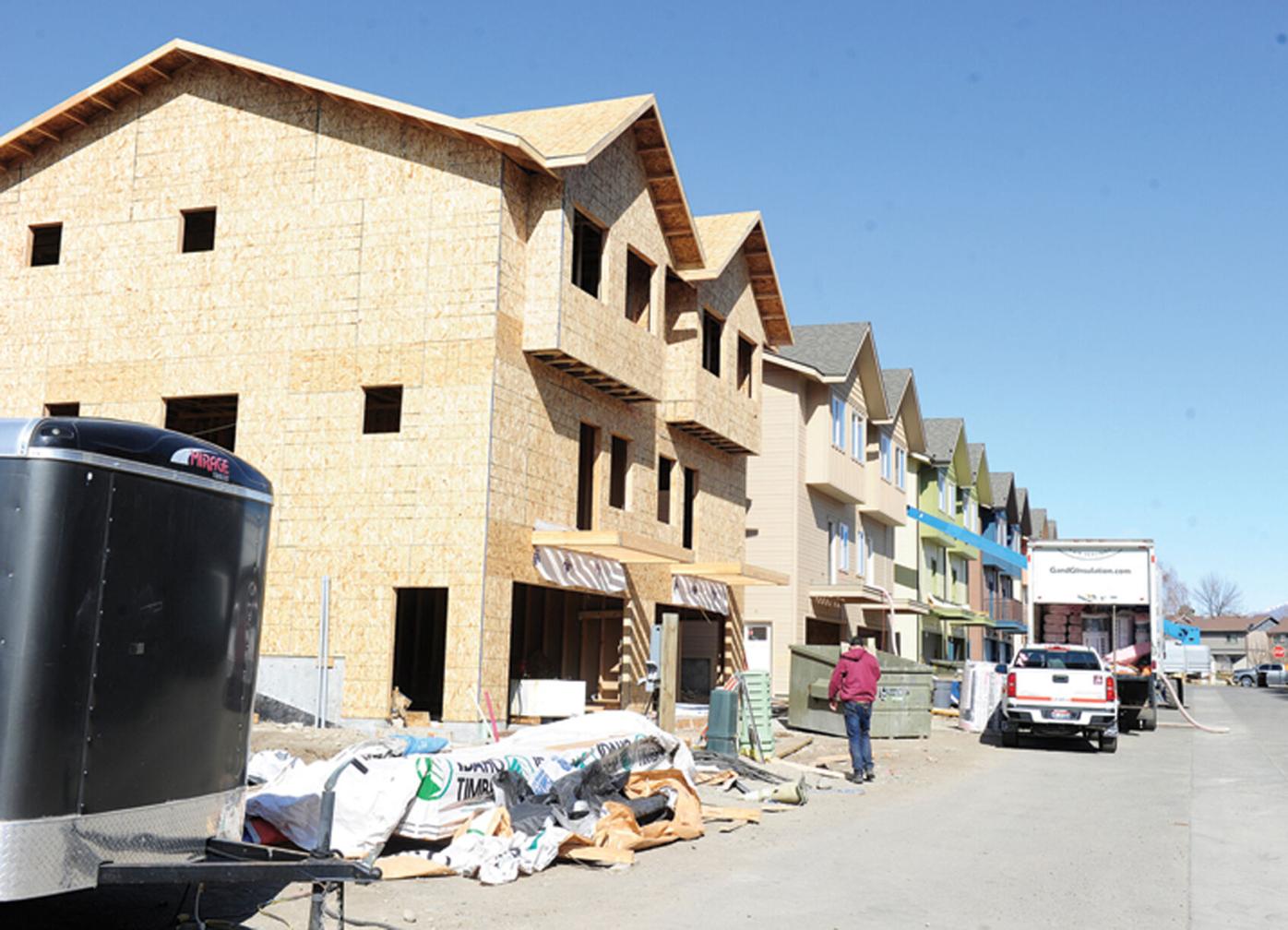 The cost of some of the new Sweetwater townhomes now under construction in Woodside subdivision south of Hailey will reflect a dramatic rise in building material costs. 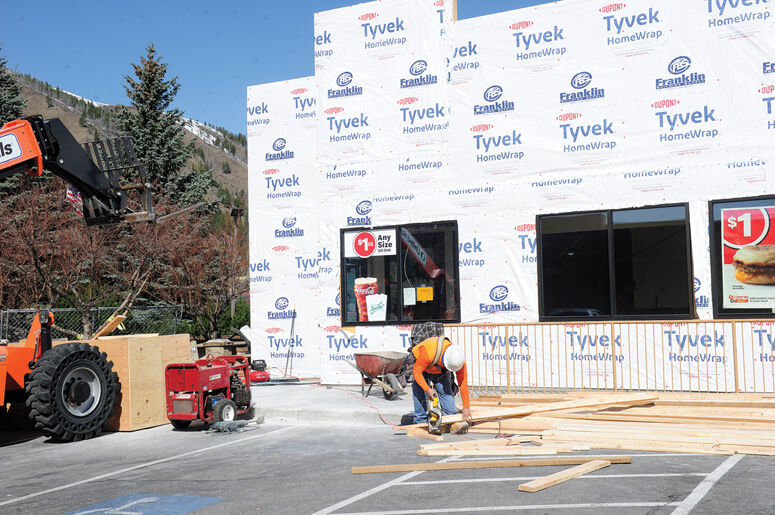 Building wraps, like this being used in a renovation of McDonald’s in Hailey, have been in short supply due to a storm in Texas that caused damage to petrochemical plants there.

Construction sites are bustling with activity throughout the Wood River Valley as crews ramp up productivity during the warmer months, yet the high cost of construction materials is putting the brakes on some projects.

Builders are reporting skyrocketing prices for lumber, piping and other supplies as well as labor shortages during what could be a boom season for home construction.

“’Lumber prices have tripled since last fall,” said Don Lane, the owner of Zabala Construction in Hailey. “Cedar is outrageously expensive and the cost is very high. Most of my clients understand, but they are upset about it. And I have been told that prices aren’t coming down anytime soon.”

Lane has two single-family home projects under construction, including a 5,000-square-foot home in Lane Ranch that he started building in June. At that time, the cost of doing business had not been shaken by rising material costs brought about by ramped-up demand and short supplies, a trend that has been reported nationally.

Lane said the cost of ABS and PVC pipe (petroleum-based products) is also way up, almost three times what it cost last fall. He said he has been used to going to AC Houston or Franklin Building Supply for lumber when he needs it. But this summer he has to plan ahead. He even called stores in Boise and found the same situation there.

“The demand is so high they can’t keep up,” he said. “Usually there’s enough two-by-fours and plywood available locally. Now you have to tell them what you’re going to need for the next three or four months so they can bring it in.”

Calls to three construction materials companies for information went unanswered, or the owner declined to comment on the situation.

“The problem is likely to last right through this building season,” said Ken Simonson, chief economist for Associated General Contractors of America, a national trade association for the construction industry. “Idaho is really booming. It is by far the leading state in the rise in construction jobs over the past year, with an increase of 8.2%, whereas national construction employment has declined by 4%.”

Simonson said Idaho construction jobs hit a record high in February in Boise, Coeur d’Alene and Idaho Falls. He said Utah and Arkansas are the second and third busiest construction states in the U.S. He attributes the high cost of building materials to temporary shutdowns during the pandemic and a devastating winter weather event in Texas in February.

“Due to pandemic-caused shutdowns from February to April 2020, lumber mills have had a difficult time getting up to full production,” Simonson said. “Truck drivers are also in high demand. This has been combined with a surge in demand for lumber by those doing home additions and renovations. Restaurants have been buying lumber for new railings. There is a similar dynamic with some kinds of steel—record prices and record delivery delays.”

“Most of my clients understand, but they are upset about it.”

Simonson said PVC and ABS piping and other plumbing supplies have been in short supply due to the storm in Texas that caused damage to petrochemical plants that produce resins used in creating those supplies as well as vapor barriers, glues used in plywood and packaging materials.

“Even layering in cardboard boxes, as well as paints,” he said. “All of those have been set back by damage to plants in the Houston area, with nationwide implications.”

Kameron Spencer, project manager for KM3 Construction out of Salt Lake City, is overseeing construction of 14 new Sweetwater Community housing units in Woodside subdivision that are scheduled for completion in August. His company bought enough lumber to get the units built in February 2020, just before the pandemic started causing shutdowns in the production of many construction material operations.

“We got lucky with a bulk discount,” Spencer said.

But a planned second phase of start with 20 new Sweetwater units in May will be challenged by rising costs and materials “rationing,” he said.

“We saw this in 2007 and 2008, but mostly with piping products. Now with the lumber too, it’s a little different,” he said. “Our concrete supplier will only pour one foundation at a time rather than two, and also not pour on Fridays, so that is a 20% drop in the supply. It’s affecting us in Salt Lake City and in Hailey. We’re not seeing too many constraints on piping or electrical supplies, but some appliances have been hard to get recently.”

Spencer said his company has been facing a labor shortage since June following valleywide COVID restriction shutdowns that began in March.

“Boise and Twin Falls pulled away a lot of our tradespeople and many of them have not come back,” he said. “But the locals have been eager to work. We have had to switch our carpet, tiling and painting crews to local sources, which isn’t a bad thing.”

Spencer said he plans to use Franklin Building Supply in Bellevue for lumber moving forward. He said the company has already supplied materials for six units and with fewer complications than using his Utah supplier.

“That’s a relationship that we want to continue,” he said.

Spencer said with most of his profit margins getting eaten up by rising material costs, the cost will be passed on to homebuyers.

“Our home costs will be up about 25% more than before the pandemic,” he said.

Both Spencer and Lane said labor shortages are due in part to the high cost and scarcity of housing in the Wood River Valley.

Rising home prices are perhaps causing some homebuyers to take a hard look at construction costs before buying vacant land. Strahorn subdivision developer Jeff Pfaeffle said the high cost of building a new home has held back the escalation of land values in the more affordable southern areas in the Wood River Valley, such as Bellevue. He said the average cost of a vacant lot in his new subdivision is going for about $100,000.

“But that’s not necessarily the case in the more expensive areas to the north,” Pfaeffle said.

Pfaeffle said he, too, remembers the last housing and real estate boom, which led to a bust in 2008.

“Like everything else, the cost of infrastructure materials, such as piping, paving and power supplies, has increased along with everything else,” he said. “While those costs have gone up, the price of lots in Bellevue are still 40% less than they were in 2008. We’re only half way back to the cost of land 15 years ago.”

At some point, the residents of Ketchum need to stand up and rein in a Mayor who is self serving and not representing our town. Apart from the high construction costs that further impact the financial models of these irresponsible projects like the Marriott, we do have water issues to contend with. However, if backdoor deals are being done with developers and the City backs down, then we see these developers sue Ketchum. That's what happens when you have corruption. The City loses either way

The environment only matters when the authorities can use it to dictate orders to us.

Wait a second, you can’t build a 5,000 square-foot home for two people at an affordable price... Maybe they don’t need a home that big.

This article says constructions costs are up 25% for projects started recently. Bluebird is slated to start this summer. The original cost estimate provided in IME articles was $22mm in 2018 (excluding the value of the free land). If the cost is 25% more, that puts the new price at $27.5mm. For 56 units of housing. That's about $500,000 per unit. With the value of the free land from the CIty of Ketchum to the for-profit developer, that goes to almost $600,000 per unit. ARCH is building 60 units of affordable housing in Hailey for $200,000 per unit (Blaine Manor), including the value of the land. Maybe GMD is the wrong developer? Maybe Bluebird is the wrong project? Maybe Mr Hoffman would take a couple of million for his low density trailer park and the City could put high density affordable housing there for a lot less than $32.5mm.

I have not heard any talk about the ability to handle all of the wastewater. All of the cities are going to have to address this issue sooner or later. Hopefully sooner.

So where did we magically get the water for all this new construction?

I thought our water table was in danger, that's what city officials told us as the reason to keep raising our water rates?

Water table ? What’s that? The Wood will be lower in September than it was last September , but Who cares?

Water does not seem to be a consideration by City Council other than the replacement of the water pipes in Ketchum. What goes through those pipes has to be provided to whatever development the City Council approves, by statute, by the the water and sewer commission. In other words, the City isn’t accountable for the water supply, so it doesn’t seem to be something they think about when they approve a 6-story 100 room hotel or a 4-story 85 bedroom apartment building. I have never heard them raise a peep about it when approving a project. Would love to hear what the City thinks about this issue. Could be a good topic for an IME article.