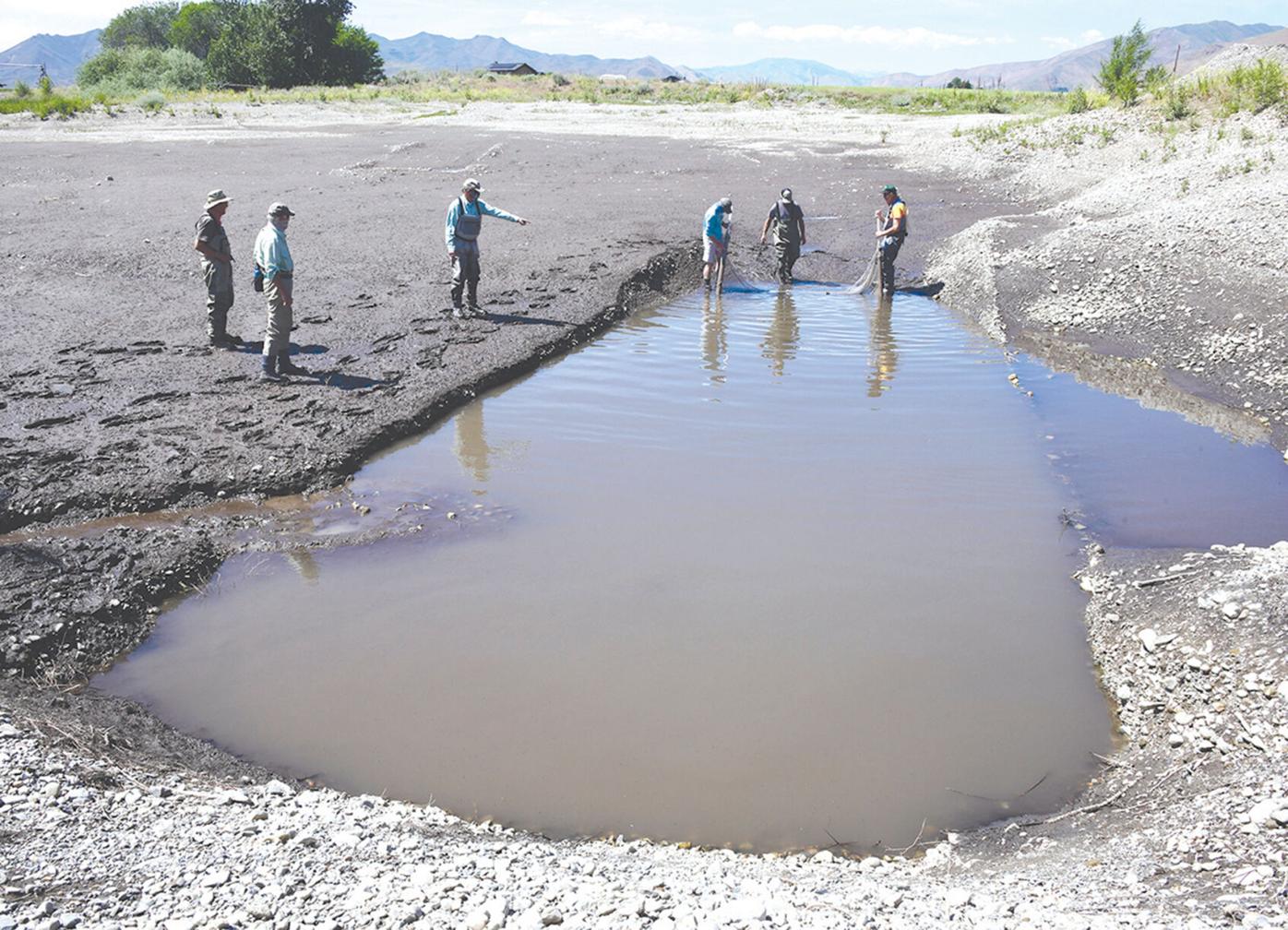 Members of the Hemingway chapter of Trout Unlimited rescued over 100 fish near Pero Road in Bellevue in late June, just one of several operations they’ve undertaken during the current drought. 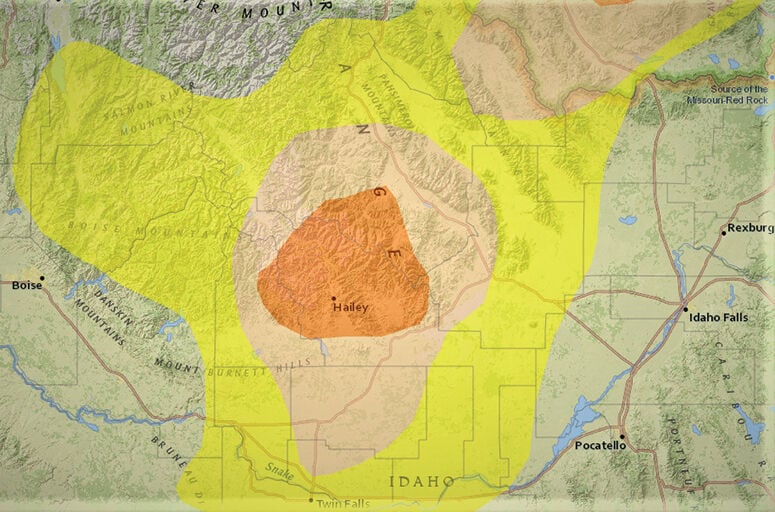 The ongoing drought, indicated in orange, extends from the Boulder Mountains down to Timmerman Junction.

Members of the Hemingway chapter of Trout Unlimited rescued over 100 fish near Pero Road in Bellevue in late June, just one of several operations they’ve undertaken during the current drought.

The ongoing drought, indicated in orange, extends from the Boulder Mountains down to Timmerman Junction.

After a cold, dry spring, severe drought conditions and low flows on the Big Wood River have already resulted in crop and pasture loss throughout the basin.

But the current drought in Blaine County—which, according to the National Integrated Drought Information System, covers a large area from the Boulder Mountains down to Timmerman Junction—has also thrown off the precarious balance between irrigation and wildlife needs, conservationists say.

With surface water rights in the Bellevue Triangle and south of Magic Reservoir being rapidly curtailed and Magic Reservoir due to be shut off a month early, challenges to fisheries are coming to a head.

One valley resident with a front-row seat is Ed Northen, a member of the local Trout Unlimited chapter. Every irrigation season, he and fellow Trout Unlimited volunteers laboriously net thousands of stranded trout out of the District 45 canal system. This year, however, is different.

“When water cuts are made, fish entrained in the smaller canals die,” Northen explained. “I hate to see it, but that’s just how it’s been for decades. Water in this region is a very, very valuable commodity, and if [water appropriation] kills the fish, it kills the fish.”

Prior to closing off a diversion headgate, District 45 Watermaster John Wright notifies Northen, who then assembles a rescue team. Timing is critical, Northen said.

“When river flows are already down, water will sink down into the aquifer quickly, and what’s left will evaporate within a few hours. You can see the fishes’ backs—sometimes it’s too late,” he said.

The trout that can be saved are scooped into five-gallon buckets, transferred to a 300-gallon oxygenated tank and driven to a more northerly section of the river where they’re unlikely to return to the canals.

Last Saturday, the local Trout Unlimited chapter netted 500 trout out of an irrigation ditch south of Bellevue, a fraction of the 60,000-plus fish the organization has rescued over the years.

When Magic Dam closes next month and the tailwaters of the Big Wood retreat, Northen expects tens of thousands of trout will become stranded.

If the dam were gradually shut off over a few days, he said, fish would sense the decreasing flows and head north to safety. But the 110-year-old dam has only two modes—open or closed—and the cost of renovation is sky-high.

“Ratcheting down the dam slowly so the fish have a chance to cue on the water and pull back upstream—that’s a solution, but it’s not that simple,” said Mark Davidson, director of conservation initiatives at The Nature Conservancy. “You’re dealing with a canal company and a canal company board that has a way of doing business that’s worked for them for years, so you really have to work within that context.”

Northen said that in high water years, the dam is shut off late enough in the season that river temperatures are cool, oxygen levels are high and most fish can find deeper pools for the winter.

“In low water years, you have warmer water with plant growth and therefore depleted oxygen levels,” he said. “The fish can’t move from pool to pool to survive.”

One practical aid to help fish move upstream is fish ladders. Last fall, Trout Unlimited installed a ladder at Elkhorn Creek with the cooperation of the Lane Ranch Homeowners Association.

To prevent trout from straying into agricultural fields in the first place, fish screens can be placed at diversion points. In the Salmon River basin, for example, over 270 fish screens help keep thousands of endangered Chinook and sockeye salmon, steelhead and bull trout out of irrigation ditches.

Without the screens, a majority of the anadromous, or ocean-going, fish would perish in canals before they could migrate to the Pacific Ocean, mature in size and journey home to their birth waters, Davidson said.

No fish screens have been installed in any diversion canals in the Wood River Valley and northern Snake River Plain. According to Davidson, that’s for two reasons—cost and maintenance. By his estimate, putting a screen in a canal running between 10 and 20 cubic feet per second would be “in the tens of thousands of dollars range.” Self-cleaning fish screens, which automatically expel weeds and other debris, come at an even higher price tag.

“Most solutions ultimately come from the water user community because they’re thinking about this all the time,” Davidson said. “We’ll ask farmers and ranchers how they could reduce their irrigation demand on their fields, and they’ll start to brainstorm ideas on how we can help them get there.”

“We’ve created an agricultural system that has been built brick by brick, quite literally,” he said. “Cities have been built around it. To change the system, everyone will have to sacrifice something to some extent.”

Last year, The Nature Conservancy partnered with the owners of Cove Ranch to reduce their water use by 380 acres of farmland, moving that conserved water back into the canal system. That’s just one example of a strategy to improve water flow in the local fishery, Davidson said.

The Wood River Land Trust’s approach, according to Executive Director Scott Boettger, is keeping water flowing at a consistent 15 cfs through the canal system during the hot summer months.

“Our key is figuring out ways to not manipulate nature, but working with it,” he said. “What we’re trying to do is not only make sure that fish aren’t stranded, but ensure they can survive in times of low flow in canals.”

Eighty years ago, the only method of irrigation in the Bellevue Triangle district was diverting water from the river, he said. Then, groundwater pumps came along in the 1950s.

“All of a sudden, you saw more water readily available to farmers,” he said, “but they were pumping out more than they were putting in.”

To maintain a balance in which wells and streams don’t run dry, water not used during irrigation season and extra water from a flood can be diverted into an aquifer recharge system.

“It’s easy to pit water users against conservationists, but that’s not our objective,” Boettger said. “We’re trying to keep farms active, but also make sure our fisheries aren’t destroyed by overwatering. It’s important to have advocates not just for water users, but for other wildlife and recreational benefits.”

Ultimately, Boettger said, it’s not possible to return all fish back into the stream system every year. But in periods of drought, it’s not just the big fish that are killed—it’s all of them, he said.

“It takes a while for our fishery to bounce back after these die-offs. If we could keep drought cycles from killing all these fish every six years or so, we’d have a world renowned fishery,” he said.

“We really don’t need that much water to make this happen,” he said. “If we could maintain flows and oxygen levels year-round—it would just be phenomenal.”

This is the second part of series on the drought outlook this summer. The next installment will feature farmers and ranchers who have reconnected river corridors and restored trout habitat.

“If we could keep drought cycles from killing all these fish … we’d have a world-renowned fishery.”

With this year’s drought cycle overlapping with disrupted supply chains caused by COVID-19, farmers and ranchers across Blaine County have had…

The Big Wood River is no longer a "blue ribbon" trout stream. First, and foremost the river must be made "Catch and release fly fishing only with dry flies". However, economics will not allow this as there are too many people whose living is tied to river which in the end will be self-defeating.

The river has lowering flows and warming temperatures, the water table is falling, it is slowly drying up. . Every additional square foot built in the flood plain increases the chance we will lose our fishery in the long run. In the last year, 3 large homes have been built on Aspen Lakes Dr in the flood plain, including 1 on a lot that had river water flowing through it 3 years ago. Next time we have 3 years of drought, we could lose our wild fish. Solutions: Stop building in the flood plain and restrict lawn watering. Water used in agriculture is more important that our ridiculous watering of large lawns. Rivers and creeks have been pumped dry all across the west, we are on doing the same thing here.

I agree, don’t blame the ranchers who supply our valley with food, blame the golf courses and rich homeowners in Ketchum and SUn Valley turning on their water sprinklers in the pouring rain! ... A total waste of water resources!! Wake up, people! BTW where are the lawn restrictions in Ketchum and SV??