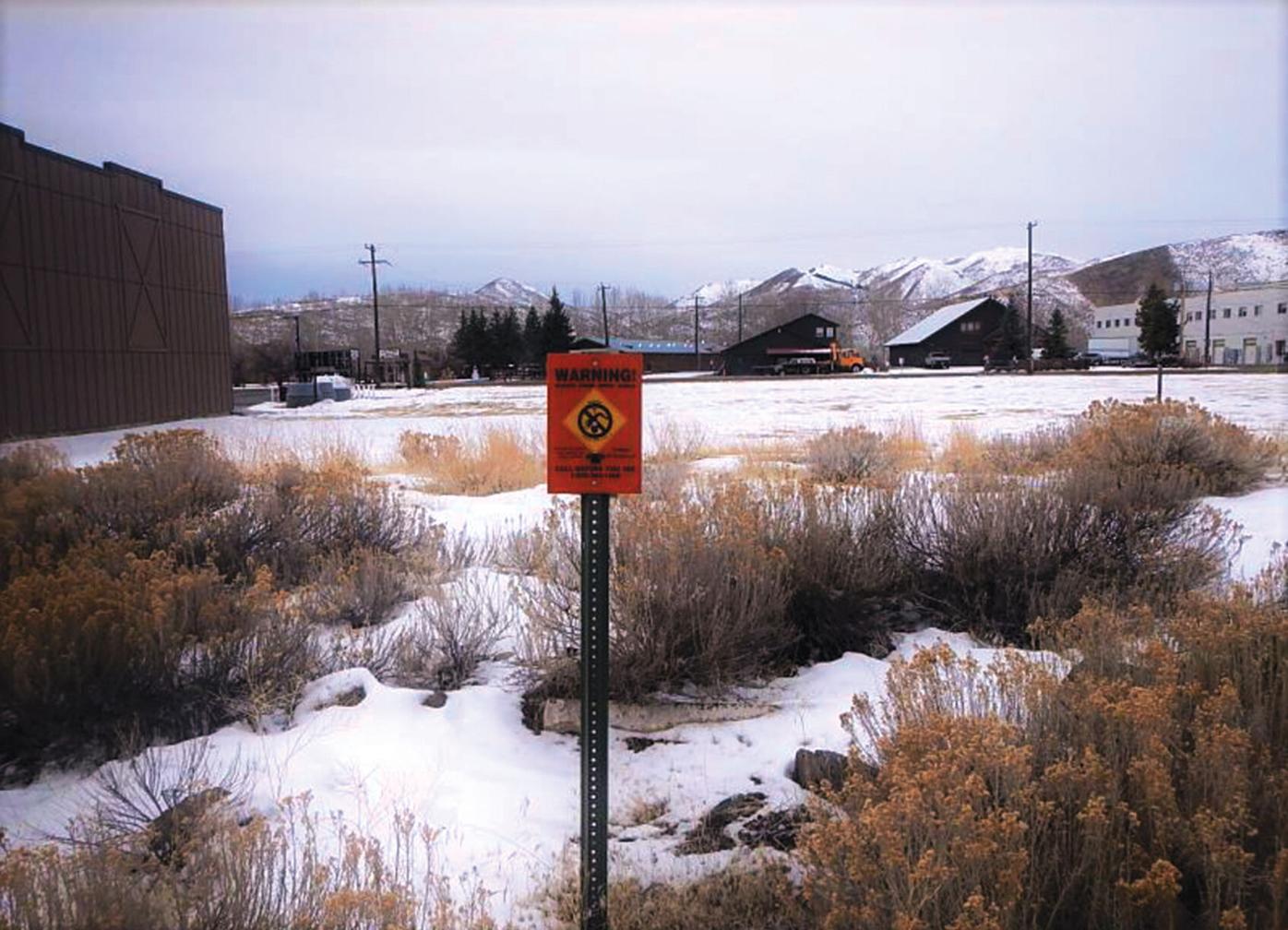 Bellevue’s JET Business Park sits just west of the old Union Pacific Railroad line, where freight loading activity polluted the area’s soil with arsenic, lead and other heavy metals over a century ago. The rail line is overlaid by the BCRD bike path today. 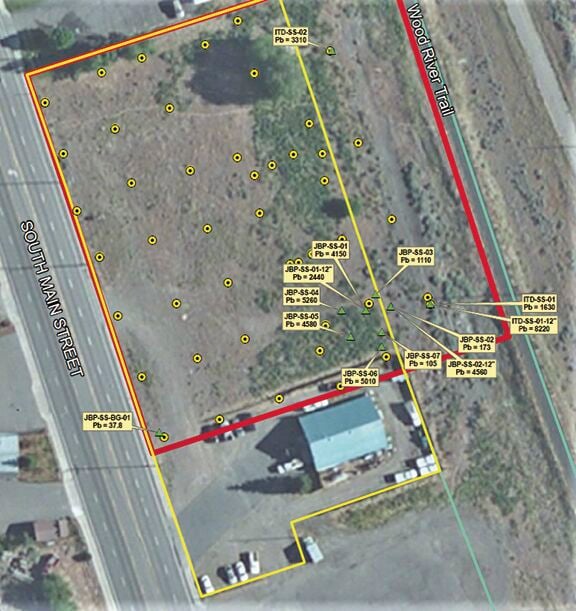 The EPA’s “safe” limits for arsenic and lead in soil are 0.68 mg/kg and 400 mg/kg, respectively. A lot in Bellevue—outlined here in yellow—revealed concentrations of 706 mg/kg of arsenic and 4,620 mg/kg of lead.

A vacant commercial lot along Bellevue’s Main Street is set to undergo extensive remediation work to treat soil contaminated by mining activity over a century ago.

The 1.5-acre property known as JET Business Park sits in Bellevue’s light industrial district next to a Phillips 66 gas station, just west of what was the Union Pacific Railroad line. Its soil contains unacceptably high levels of arsenic, lead and antimony, two environmental consulting firms and the Idaho Department of Environmental Quality found in investigations between 2018 and 2020.

Silver, lead and gold ore from nearby mines was “reportedly loaded onto rail cars at this location for many years,” causing the contamination, a third environmental consulting firm, Douglass, Inc., reported this year.

Missoula, Mont.-based Douglass, Inc., submitted a cleanup plan for the site to the DEQ last month. The plan was required under a remediation agreement executed in May between the owners of JET Business Park, trustees Edgar and Elaine Redman, and the DEQ.

Upcoming remediation work would involve excavating about 200 cubic yards of contaminated soil, stockpiling it and removing heavy metals using phosphoric acid poured from 55-gallon drums, the cleanup plan states. The treated soil would then be tested and, if accepted, disposed of as non-hazardous waste at Milner Butte Landfill in Burley.

“JET proposes to remove the contaminated soil area until field readings and laboratory confirmation sampling demonstrate that residual site soil are below the remediation standards,” the plan states.

Without remediation work, commercial and construction workers on site could face “potential exposure” to heavy metals from “ingestion and dermal contact” with the soil, the plan says. There is no evidence that the metals have leached into the groundwater, it states.

Antimony, arsenic and lead exposure can pose several risks to human health, according to the U.S. Centers for Disease Control and Prevention.

In early 2018, Hailey-based environmental consulting service ACS first discovered the “potential existence of heavy metals” on the property. A subsequent site assessment by the DEQ in 2019 indicated that lead concentration in soils “exceeded acceptable limits and required disposal as a hazardous waste.”

Alta’s samples from JET Business Park, however, revealed soil concentrations of 706 mg/kg for arsenic, 5,260 mg/kg for lead and 318 mg/kg for antimony. The heavy metals were most abundant on the southeast corner of the lot, where a freight loading ramp had been stationed.

Antimony, arsenic and lead exposure can pose several health risks, according to the U.S. Centers for Disease Control and Prevention. Long-term arsenic exposure is associated with several types of cancer; lead exposure has been linked to damage to the brain and nervous system; and antimony exposure can cause lung, heart and stomach issues.

Alta previously recommended transporting the contaminated soil to a hazardous waste disposal site in Grand View, Idaho, but that option would cost the lot owners $225,000—nearly the price of the property, according to county records. Treating the soil with phosphoric acid and transporting it to Milner-Butte would cost between $100,000 to $150,000, Alta said.

The proposed cleanup plan for JET Business Park is available for public comment until Friday, Aug. 6. It can be viewed at https://www.deq.idaho.gov/public-information or in hard-copy

It seems like mixing acid with lead contaminated soil will mobilize the lead and cause the lead to move deeper in the soil.