The Bellevue City Council voted Friday to allow construction and landscaping to begin immediately under a set of 18 guidelines for workplace hygiene and other precautions to reduce the risk of COVID-19 transmission.

The new emergency order keeps restrictions on business activity, travel, isolation, social distancing and tourism implemented by the Idaho Department of Health and the city. But, it replaces the city's ban on construction and landscaping with the safety standards.

The new rules go into effect today, Friday, April 17, and extends until April 30.

City Council President Kathryn Goldman expressed concern over the decision, which she said could put people in the community at risk of contracting the deadly virus. Isolation orders and business closures countywide have led to a decrease in people testing positive for the virus, multiple local health experts have stated in the past week.

“It is difficult to be 100 percent confident with this moving forward, but we have to figure out how,” Goldman said. “This is a test of sorts.”

Bellevue Mayor Ned Burns has been attending meetings with Blaine County and city leaders from across the Wood River Valley in recent weeks to establish protocols in response to the virus. He's convinced that the valley has reached a point of “negligible new case numbers” over the last five days, amounting to “an infection here and an infection there.” Burns expects other cities in the valley to make the same decision and establish a “singular standard” for the county. (So far, he's right: Blaine County made a similar move on Thursday, and as Bellevue convened Friday, Ketchum’s city council opted to let its construction ban sunset Sunday night.) 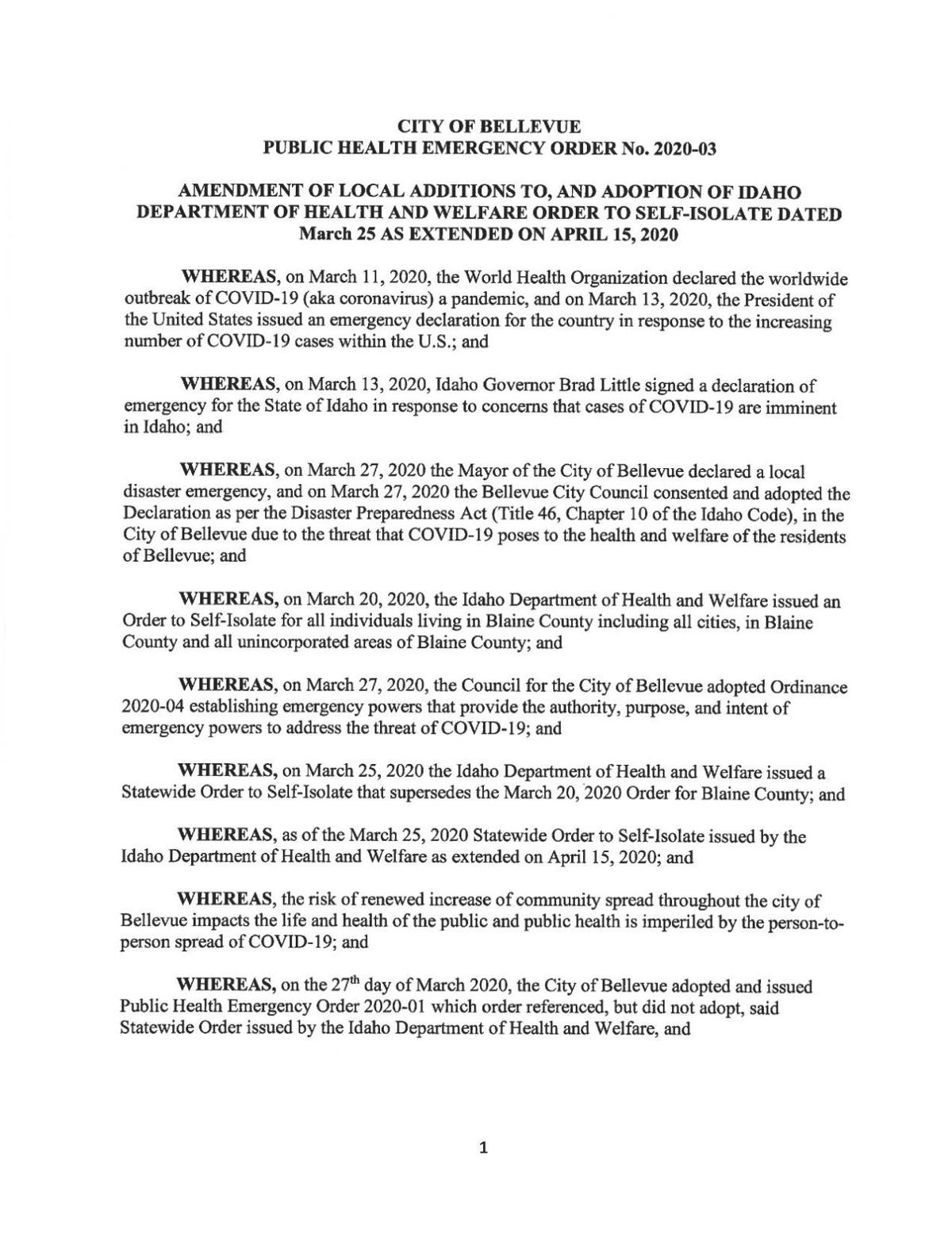 Joe Kidder, who could not be identified as a city or county resident, said the city should continue to restrict workers at least until the end of April or until a downward trend in cases had been apparent for at least two weeks to protect health care workers and others.

“We have worked so hard to squash this virus,” Kidder said. “Can’t we go just a little longer?”

Bellevue resident Dorothy Schinella said she was “appalled” at the number of workers coming into the valley and shopping at Atkinsons’ market and not wearing face masks.

But Ted Higginbotham, a local plumbing contractor, said he was upset over the recent treatment of construction workers as “second class citizens,” and that his crews, half of whom commute to the valley from outside Blaine County are taking all necessary precautions.

“We are being safe,” Higginbotham said.

The “guidelines and limitations for construction sites and trades” include detailed instructions for workplace handwashing, travel and oversite, which Bellevue Community Development Director Diane Shay said would be delivered to every job site in the city next week.

“We will use our best judgement in investigation and responding to any calls about violations,” Shay said.

Burns said the guidelines must be followed to avoid a misdemeanor charge and a shut-down of the site.

Goldman expressed concern over the Department of Health’s ability to contact trace COVID-19 cases from one person to another and sought assurance that off the virus cases begin to rise again the city would take steps to once again control business activity.

I guess that SV opened the floodgates. And that is enough justification. So, one of my questions...where is the hot spot in Blame County? Ketchum? That's where the tourists were most likely to infect everyone else. Are Bellevue, Hailey, Carey, Fairfield, Shoshone workers at most risk in Ketchum/SV?