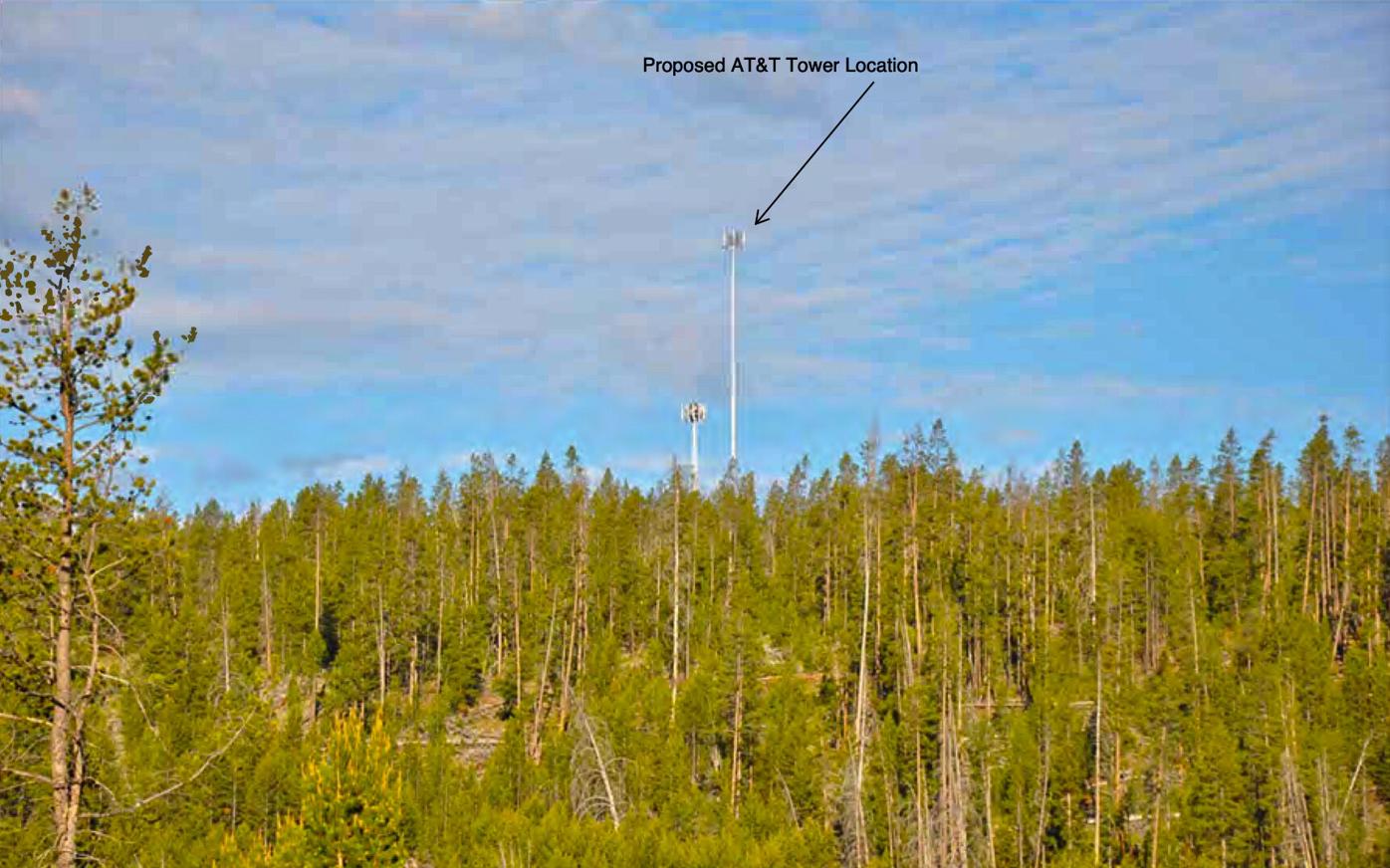 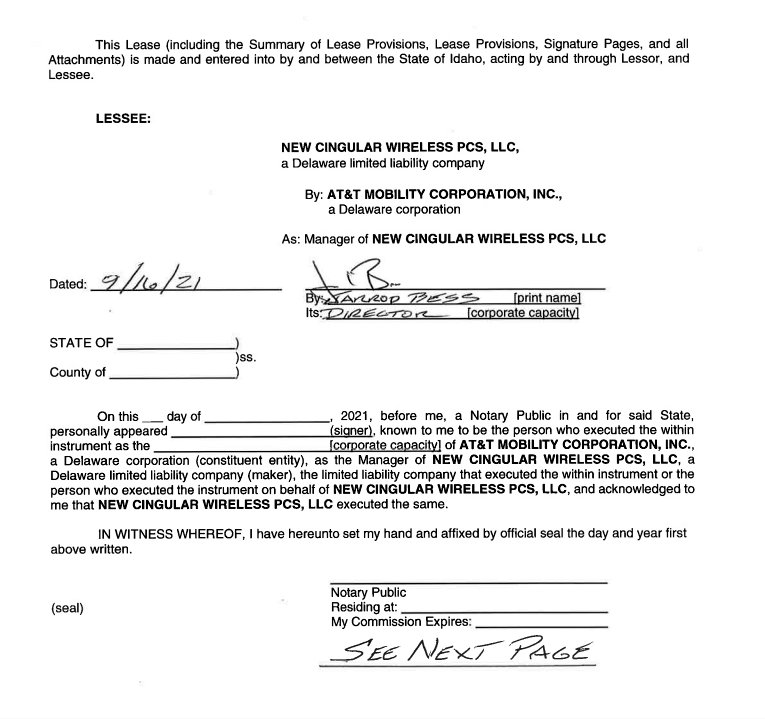 A page of the 2021 lease agreement between the Idaho Department of Lands and AT&T, obtained via public records request.

This story has been updated to reflect additional information obtained after print press deadline Thursday.

A plan from telecommunications giant AT&T to build a 195-foot cell tower on a ridge overlooking Redfish Lake in the Sawtooth National Recreation Area appears to be moving forward, though not under its originally expressed purpose of improving emergency communications in the area.

The proposed tower would sit on a one-acre parcel managed by the Idaho Department of Lands approximately 10 miles south of Stanley and just west of the Sawtooth Hatchery.

The monopole was first proposed in January 2020 as part of the First Responder Network, or “FirstNet,” a federal platform established by Congress in the wake of 9/11 to strengthen police, fire and emergency medical communications.

The platform partnered with AT&T in 2017 to expand cell coverage for first responders across the country while also increasing coverage for regular cell phone users. Most recently, the public-private partnership has brought to fruition dozens of cell towers in South Carolina, South Dakota and on the nearly 28,000-square-mile Navajo Nation in the Four Corners region of the U.S.

In 2020, AT&T said the proposed FirstNet tower in the Sawtooths would provide first responder coverage across Redfish Lake in the event of boating accidents, wildfires, avalanches and other emergencies.

The plan proved to be unpopular, attracting 25 public comments in opposition to the project of 28 total comments received by the Idaho Department of Lands that spring. Concerns from the Custer County commissioners, the Sawtooth Society, the Sawtooth Interpretive & Historical Association, the Idaho State Historic Preservation Office and the Idaho Conservation League focused on the tower’s perceived negative impact on scenic vistas and the historic Redfish Lodge Complex.

"It seems like $30,000 a year is pittance compared to the visual and historical impact the tower will have."

“The tower will be only 0.6 miles from state Highway 75 and 1 mile from the access road to Redfish Lake, making it a substantial visual impairment for thousands of tourists who visit Redfish Lake each year to enjoy its outstanding recreational opportunities,” Botti wrote to the IDL in 2020. “The economy of Stanley is heavily dependent on recreation and tourism, so any impairment to that experience is an important consideration to Stanley businesses and resident[s] alike.”

According to lease documents obtained via a public records request, AT&T appears to be pursuing a standard 195-foot commercial tower on the same site near Redfish Lake without FirstNet.

The renewable lease between IDL and AT&T, which is doing business as New Cingular Wireless Services, Inc., was first signed in September 2021 and made official two months later with little fanfare. It runs through 2040 at $30,750 per year—increasing annually by 3%—with revenue going to IDL to support Idaho public schools.

According to the agreement, the cell tower’s footprint must be limited to 50 feet by 75 feet and the premises should be kept free of noxious weeds. IDL “may sell all or any portion of the leased premises” during the term of the lease, the document states.

The agreement also says that the Federal Communications Commission must approve the commercial cell tower before it goes up.

“Installation of towers, poles, antennas or other equipment shall not exceed applicable FCC standards … as of the date of this Lease, no lights will be placed on or around the cell tower, poles, or antennas,” it states.

Josh Johnson, acting Central Idaho director for the Idaho Conservation League, told the Express that ICL would be fighting the renewed proposal along with Advocates for the West and described AT&T’s effort to install a commercial tower as a “classic bait-and-switch.”

“The whole push for the cell tower from the beginning, at least to the public, was that this is for emergency communications and was being done under this FirstNet program, which carries with it some federal funding that a normal commercial tower does not,” Johnson said. “It’s one thing to say Redfish is very popular with recreationists and that’s why we need to [improve] emergency communications here. But this plan calls into question AT&T’s motivations. It doesn’t seem logical. This has been a bit fishy all along.”

Johnson added that the ICL plans to submit a petition to the FCC demanding that the agency complete an environmental assessment.

“The state—IDL—is just happy to have their lease signed. I know they are constitutionally mandated to maximize their income from that site, but it seems like $30,000 a year is pittance compared to the visual and historical impact the tower will have,” he said.

At least two other existing cell towers serve the Sawtooth Valley. Challis-based Custer Telephone Cooperative, or Custer Tel, operates a 100-foot communication tower on leased state land about 100 feet from the proposed AT&T tower site, and Stanley residents are served by a cell tower near the airport designed to look like a tree.

Custer Tel opposed the initial AT&T and FirstNet proposal, requesting that the agencies instead co-locate on Custer’s own nearby 100-foot tower or build several smaller towers.

Custer Tel CEO and General Manager Dennis Thornock previously told the Express that AT&T had refused to co-locate on the existing Custer tower because its height “would not meet their needs.”

In 2020, Sawtooth Search and Rescue Commander Gary Gadwa wrote to the IDL that the Custer Tel tower made the AT&T proposal unnecessary.

“We recognize the need for improved communications for emergency services and first responders in the Sawtooth Valley … However, we feel very strongly that the existing Custer Telephone tower meets or exceeds the desired cell phone coverage in the Sawtooth Wilderness,” Gadwa stated.

In response to inquiries from the Express as to why AT&T was pursuing a commercial tower and whether it has reconsidered co-locating on the Custer Tel tower, AT&T spokeswoman Sarah Rodriguez wrote via email that AT&T was still planning to partner with FirstNet on a tower at Redfish Lake to “improve service and coverage for first responders.”

“This site will provide first responders with access to the FirstNet network, which provides public safety with dedicated connectivity when they need it and allows them to communicate during an emergency,” Rodriguez told the Express after press time Thursday. “As with all sites, network capacity is available for customers on our commercial network in instances where first responders are not requiring bandwidth.”

Rodriguez added that AT&T has “in good faith explored options to co-locate with the existing local telecommunications provider [Custer Tel], which ultimately did not lead to an alternative solution.”

“The height of the proposed site is necessary to cover areas on and around the lake which remain a need by those responding to emergencies,” she wrote.

Emails from FirstNet spokesman Andrew Bielakowski—originally sent to the Idaho Conservation League and obtained by the Express on Thursday—told a different story.

“We have been in contact with AT&T regarding the proposed Redfish Lake site. That location has been removed from the current initial buildout for the FirstNet Authority’s Nationwide Public Safety Broadband Network (NPSBN),” Bielakowski wrote on May 24. “AT&T has informed us that the Redfish Lake site may be pursued as an AT&T commercial site in the future, but their plans are not certain. To provide service in this area of Idaho as requested by the state, an alternative location is being pursued.”

Bielakowski confirmed in another email to the ICL on July 13 that AT&T was planning to forge ahead with a commercial tower at the Redfish Lake site. He noted that FirstNet still had an opportunity to co-locate on the commercial tower—in other words, build on the tower and pay rent to AT&T.

"I heard back from AT&T yesterday and they informed me that they had an internal meeting that cleared up misunderstandings that the market folks had and ensured that they were on the right path and same page about how the Red Fish Lake (RFL) site is regarded and dealt with moving forward. As previously discussed, the RFL site is being pursued as an AT&T commercial site, and a FirstNet antenna may be collocated on it,” Bielakowski wrote. “The RFL site will follow the normal commercial FCC approval processes.”

According to the lease agreement AT&T signed with the Idaho Department of Lands, a co-locator—in this case, FirstNet—would be considered a sublessee and, if brought on board with IDL approval, would cause AT&T’s annual rent to increase by at least 25%.

“Prior to adding a co-locator … Lessee shall contact lDL, who shall identify the amount to be charged by reason of such co-locator and for each use or additional use by such co-locator,” the document states.

As of press deadline Thursday, Bielakowski could not be reached for comment on why FirstNet had pulled its original tower proposal.

Against! Do these corporate city trolls really have no other motivation than their own bank accounts? Rape and pillage of our natural resources and scenic wonders is their first order of business.