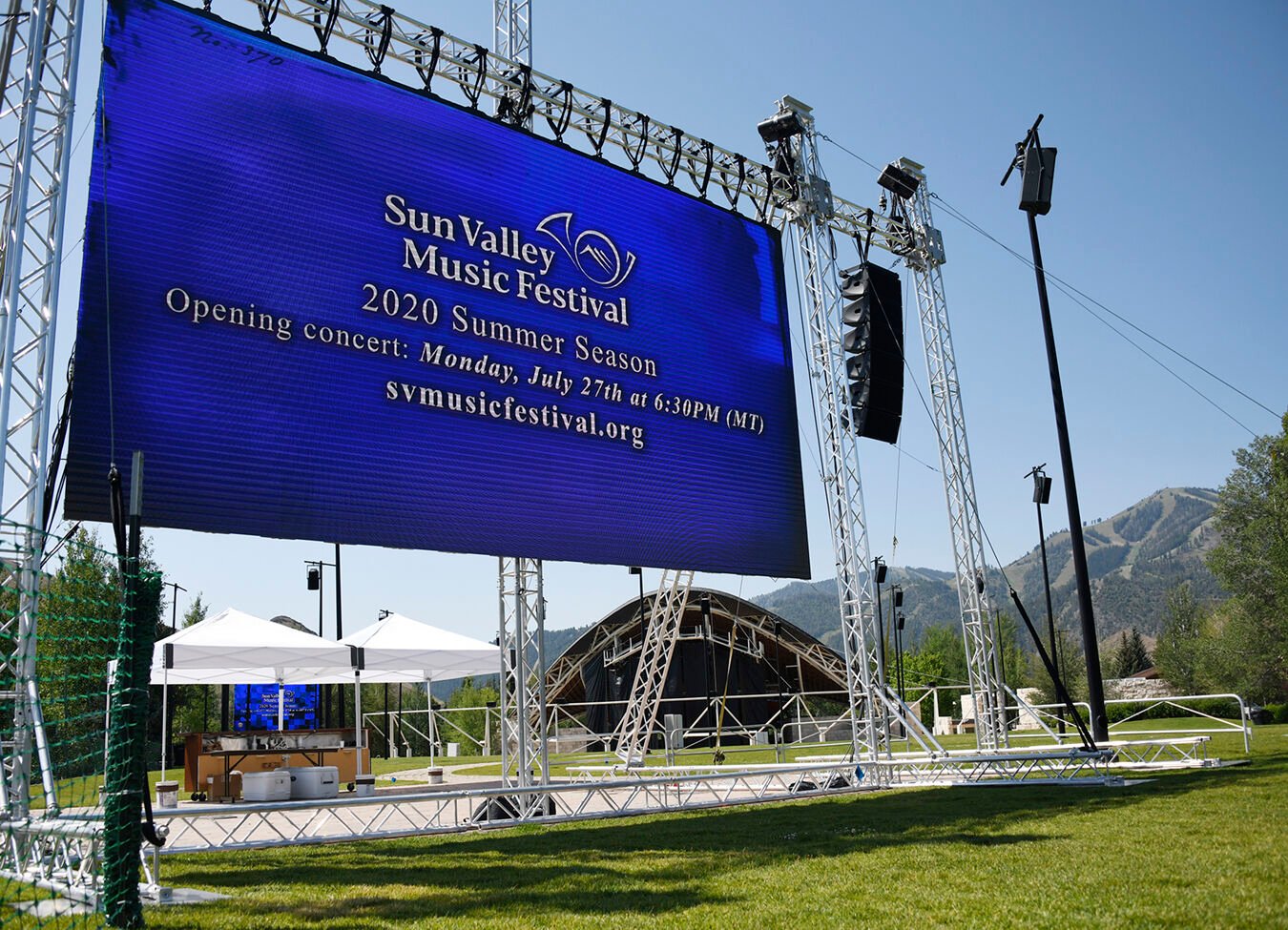 2020’s virtual Sun Valley Music Festival was broadcast to the big screen at the Sun Valley Pavilion. This year, the entire orchestra is planning to come back for an in-person concert series. 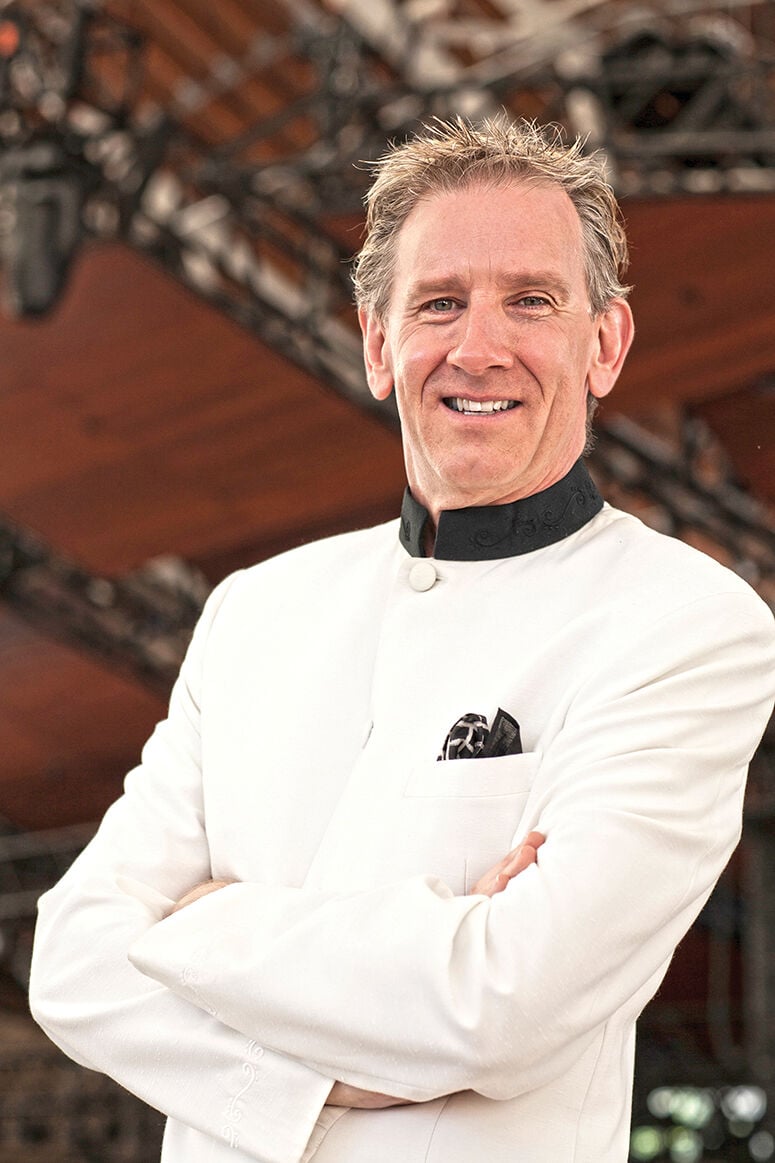 “Our 2021 season reflects the great joy that all of us on stage and in the audience feel in being able to resume live music-making again.”

The Sun Valley Music Festival has confirmed that its full ensemble of musicians—as well as many guest artists—will return to the Sun Valley Pavilion for a fully in-person concert series this summer.

The festival’s 37th season is scheduled to kick off Monday, July 26, and continue through Thursday, Aug. 19, presenting more than a dozen live, free-admission performances by its world-class orchestra, as well as a full roster of outreach and educational programs.

Between projected vaccine rollout and last summer’s success with socially distanced pods on the Pavilion lawn, festival leaders determined they would be able to proceed with a safe season under any circumstances.

“I’d do it again in a heartbeat,” Neale concluded at the end of the season, “but I sincerely hope we don’t have to. As wonderful as it was and for as many people as we reached, I don’t think a single person would say it’s better than the real thing. We’re hungry for each other’s company, for the feeling of sound floating through the air.”

Now, it looks like his wish (and everyone else’s) is going to come true.

Aptly dubbing the 37th concert series a “Season To Celebrate,” Neale has curated a program featuring “classical mainstays and a special celebration honoring frontline heroes,” according to the festival’s official announcement.

“Our 2021 season reflects the great joy that all of us on stage and in the audience feel in being able to resume live music-making again,” Neale said. “The musicians and I look forward to returning to our beloved Wood River Valley to perform in the beautiful Sun Valley Pavilion and share our passion and enthusiasm with the community once more.”

The season will begin July 26 with the first of three chamber orchestra concerts, the other two following on July 27 and 31. Acclaimed violinist Vadim Gluzman will headline a chamber recital on July 29, and select Festival Orchestra musicians will perform small ensemble concerts Aug. 3 and 17.

The first full Festival Orchestra concert will take place on Aug. 2 with the aforementioned musical tribute to the frontline workers whose tireless work in the past year is part of what will make an in-person festival this summer possible.

“Our 2021 season reflects the great joy that all of us on stage and in the audience feel in being able to resume live music-making again.”

Grammy-winning violinist Joshua Bell will headline this year’s fundraising Gala Concert on Aug. 4. The Gala is the only event to which the festival charges admission each year, and revenue from ticket sales helps to ensure every other concert can be presented admission-free. Full details, including dates for ticket sales, will be announced later this spring.

While scheduling these concerts—as well as a full slate of educational programs for students in grades two through 12 and college undergraduates—Executive Director Derek Dean stressed that safety was always the primary consideration, and he and his team are prepared to adapt if need be in the name of the health and safety of audience members, staff and musicians.

“The festival is delighted to return to live, in-person programming this summer,” Dean told the Express. “Of course, safety is the top priority, so the team is working on scenarios and plans to keep everyone involved in the festival—from musicians to housing hosts to donors, volunteers, staff and patrons—as safe as possible.”

Last year, amid low local COVID-19 infection rates, the festival was able to open up the Pavilion lawn with carefully spaced, socially distanced pods, so audience members could view the streamed concerts on the Pavilion’s big screen. Given how smoothly that went, even if this summer sees continued restrictions on certain gatherings, festival management and staff are well-versed in keeping everyone safe.

Dean noted at the end of last summer that the festival had proceeded without “a single reported case of COVID from anyone on the staff, any musician, production person or audience member.”

“We were able to do it safely,” he said. “That’s what matters most.”

Safety will remain the top priority moving forward, but for now, local music lovers can rejoice that summer 2021 will indeed be a “Season To Celebrate,” with the return of one of the valley’s most beloved annual events, the Sun Valley Music Festival.

Further details of the season, as well as updates on any changes that may have to take place, can be found online at svmusicfestival.org.

Our community is so fortunate to have this festival, and to have such a dedicated music director in Maestro Neale. One of the benefits of a town like this is the vibrancy brought to it by the donations of both full time and part time residents. Ketchum and Sun Valley are enriched not only by their permanent residents, but also by the generous contributions (and taxes!) of our second homeowners.

Ann unable to pass through the sage,

Cops have me blocked for the FreebueThrong

While geese overhead squak in rage:

BEWARE ! BEWARE! COVID IS THERE!