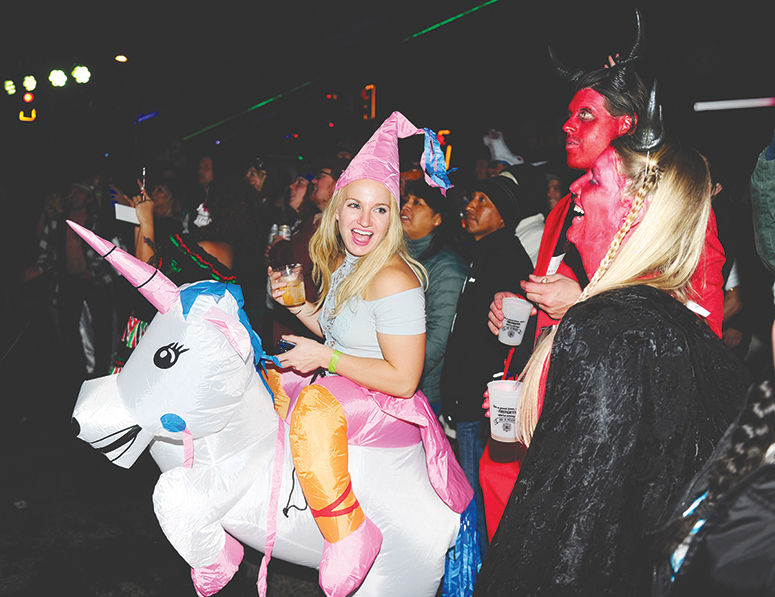 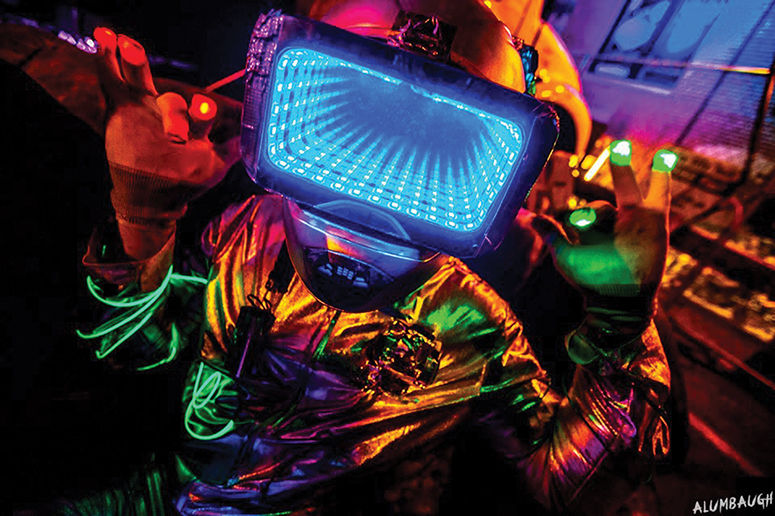 DJ Doc Roc will provide the beats and the lasers for Saturday’s soiree.

DJ Doc Roc will provide the beats and the lasers for Saturday’s soiree.

Halloween 2019 is just over a week away, but for Ketchum, the main celebration is set for this weekend, on Saturday, Oct. 26: the Nightmare on Main Street party.

A longstanding Ketchum tradition, the Nightmare sees costumed Halloween revelers take to a closed-off portion of Main Street by the hundreds. The party is defined by its rave-like music, costume contest and, recently, an extravagant lightshow.

For many years, the city of Ketchum organized and sponsored the event, but that tradition ceased five years ago. Local Halloween enthusiast Nick Harman recalled this turn of events, saying, “I took all the costuming of Halloween very seriously and even won the contest a couple of times. I had this really elaborate costume planned for that year, but didn’t see any advertising about the event. I went to the city to ask about the dates for Nightmare on Main Street and they said they weren’t going to do it anymore.”

Unsatisfied with the apparent demise of his favorite party, Harman decided to take matters into his own hands and, with just 10 days left until Halloween, launched a GoFundMe campaign to raise the necessary monies, booked music, organized a costume contest and, in a manner befitting the holiday, resurrected the Nightmare.

Since then, the celebration has continued to expand. “Each year it seems to have grown a little bit bigger and a little bit bigger. Just speaking anecdotally, last year I saw more people on the street than I had since taking over four years ago. We had people come from Twin, Rupert, Boise—all over.”

Five years on down the line, and Harman still organizes the celebration and still adorns increasingly intricate and elaborate costumes. In fact, he teased this year’s getup to be his “most elaborate to date.” One can only imagine what he will come up with.

Anyone in attendance can challenge Harman in the costume contest, which gives a prize for best overall costume, in addition to four more-concentrated categories: scariest costume, sexiest costume, most creative design and best group costume.

Be it ghastly ghoul, pop-culture icon, clever commentary or criticism, or something that truly defies classification, those who join in the party this Saturday are likely to see it all.

Winners in each category will receive a prize donated by one of the Nightmare’s numerous sponsors, including Grumpy’s, Sawtooth Brewery, Sushi on Second, The Cellar Pub and the Board Bin.

On one stage, the costume contest will take place. The second stage will host the musical stylings of two separate disc jockeys, each doing their bit at different times during the night.

DJ Loco, Whiskey Jacques’ resident  music-maker, will do a share of the heavy lifting, but the night promises to get a little wilder under the reign of DJ Doc Roc, whose thunderous beats, electrifying light show and a costume reminiscent of Daft Punk all promise to make this a deafeningly memorable evening.

Doc Roc performed at last year’s Nightmare as well, and attendees to that occasion will likely remember an exuberant laser display. With that in mind, Harman assured, “This year we’re going to have more lasers and bigger lasers.

“DJ Doc Roc—that’s his specialty. He does these incredible laser lightshows and makes the whole thing kind of rave-esque. That brought a lot of energy to the street party last year and I can’t wait to dial it up a notch,” Harman said.

As much as horror and debauchery abound in Ketchum during the Nightmare on Main Street, the main objective of the event is something a little more wholesome.

“Really, it’s about community. I have to give a shout-out to Pete Prekeges from Grumpy’s. He has a 501(c)3 organization through which he runs Ketchum Wide Open in the spring, and he allows us to run this event through his nonprofit. It helps a great deal,” Harman said.

“I think Nightmare on Main Street and Ketchum Wide Open kind of go hand-in-hand. They are both really great community events in our ‘slack’ season. It’s a wonderful opportunity for everybody to get out and have a good time.”

From 8 p.m. until 1 a.m., Main Street in Ketchum will be closed to traffic from the Warfield to Rico’s, between Sun Valley Road and Second Street. Between the Warfield, Whiskey Jacques’, the Sawtooth Club and the Casino, partiers will have more than ample access to libations. A few firepits will be set up in the street in case the night gets chilly.

This year, Harman is hoping to set up a few lounge areas around the party. Anyone who has some old couches or chairs they would like to donate should reach out to Harman at 208-450-9068.

Volunteers to help with setup and cleanup are welcome, but Harman allowed that most people will probably just want to party, and being such a great lover of Halloween himself, he said he can’t blame them, either.

As it has always been, 2019’s Nightmare on Main Street party is free of charge, thanks to the donations raised by the GoFundMe initiative and the hard work of Harman. Halloween revelers can don their masks, makeup, cloaks and whatever else and head to Ketchum for the biggest party of the season.

See facebook.com/groups/nightmareonmain for details and updates.

”This year, we’re going to have more lasers and bigger lasers.”