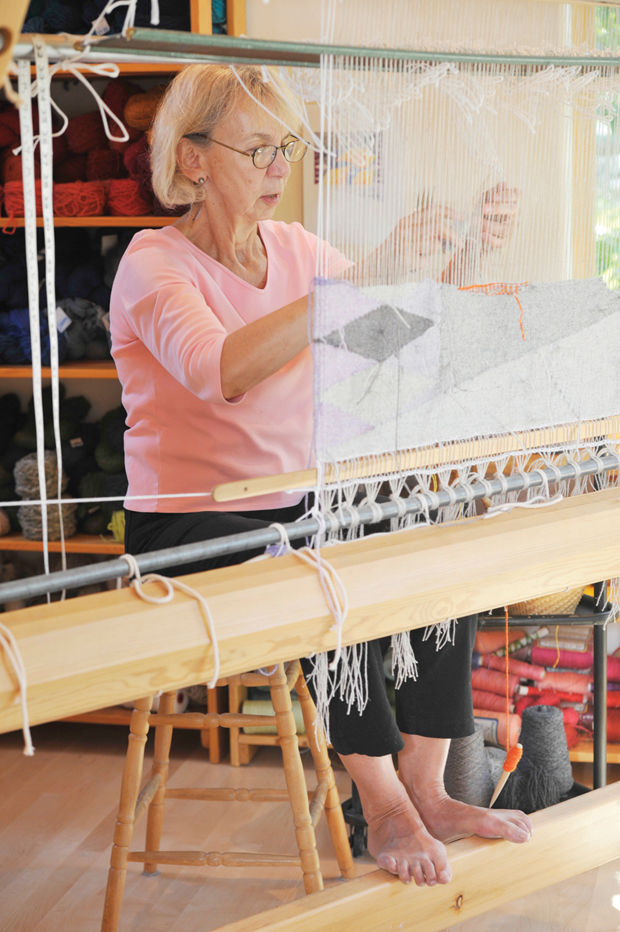 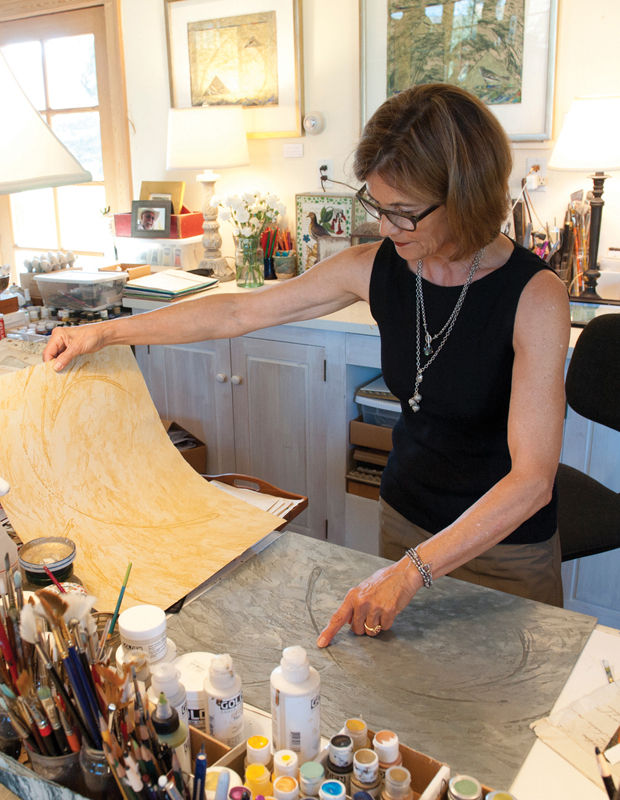 Printmaker Martha Andrea is steeped in the history of Medieval and Renaissance art, but looks to the Bellevue landscape and modern techniques for her sculpture boxes.

Printmaker Martha Andrea is steeped in the history of Medieval and Renaissance art, but looks to the Bellevue landscape and modern techniques for her sculpture boxes.

With its soaring, steepled ceiling and streams of late-afternoon sunlight casting shadows on the floor, weaver Stefanie Dash Marvel’s Hailey studio possesses the tranquil sanctity of a chapel. A Swedish-manufactured Glimåkra loom occupies one corner of the space, its intricate anatomy of wheels and bars as awe-inspiring as a church organ. And Marvel, soft-spoken and barefoot as she tiptoes through her second-story aerie, has the quiet grace of an ecclesiastic when she sits down to work on a Navajo-style tapestry.

Marvel’s solemnity when speaking about her craft belies a sly sense of humor and a colorful life that began as the daughter of two freethinking artists. Her father was a painter and arts educator; her mother, a fashion designer and set designer for Off-Broadway theater. In college, Marvel took a class at the Art Institute of Chicago, which led her to the Penland School of Crafts in North Carolina, where she mastered her minimalist, nature-inspired style. Forty-five years ago, she taught workshops in Stanley and later opened a storefront in the valley.

Working on the Glimåkra, Marvel uses her fingers and a metal fork to thread wool or linen—the warp—through the supporting strings, or weft. In recent years, Marvel has begun to paint acrylic designs on her tapestries; the papers she lays underneath capture the excess paint, which forms abstract patterns, around which she draws minute geometries with a metallic pen.

What drew Marvel to weaving, she said, is that she likes “the building of color into a structure.” She’s especially enamored with textiles’ interplay with light and movement. “When there’s a breeze,” she said, “the pieces have a different kind of life to them.”

Artist Martha Andrea knows how to maximize space. There’s not an inch of her Bellevue studio that’s not covered with paintbrushes, reference books (Caravaggio, Da Vinci), antique French papers or the works of her students from when she chaired the printmaking department at Colby-Sawyer College in New London, N.H., before moving to the valley in 2005.

Andrea arranges her sculpture boxes and prints in mise-en-scènes that suggest that the whole artwork is the sum of its parts, each piece complemented by other objets she has picked up on her travels in northern Europe and the Mediterranean.

“Even these antique books,” Andrea sighed, gesturing to one carefully curated corner of the studio, “are part of this little world I’ve created.”

With Erik Satie’s “Gymnopédies” suite and the chirps of her African Grey parrot and cockatiel echoing in the background, the formally trained printmaker gets to work. Inspired by illuminated manuscripts and Medieval- and Renaissance-period religious iconography and architecture, Andrea fills found cigar boxes with scenes that, despite their petite scale, reveal myriad layers and weeks’ worth of construction.

Using a 16-by-18-inch metal plate, Andrea produces patterns with varying techniques, such as a “sugar lift,” in which granules incise the metal in painterly strokes after they’re rinsed off with an acid wash. Andrea uses metallic paints for her ornate backdrops, then perches cutout lithographs of birds inside, occasionally adding twigs or other found materials.

Of her boxes, which can be purchased directly from the artist, she said: “I like them to be intimate; to be poetic; to be mysterious, possibly.”

Where: Locations throughout the Wood River Valley

For a detailed map of artists’ studios, go to wrvstudiotour.org.

Arts for the mountain and for the significant features. Embedded for the right and ascertainment of the arts for dissertations-superiorpapers.com for the opposed and with vital terms of the dynamics.